Solskjaer and United Bounce Back After Win Over Tottenham

Manchester United had quickly bounced back after a humiliating loss to Liverpool as they defeated Tottenham Hotspur 3-0 in London on Saturday.

United manager Ole Gunnar Solskjaer said his team has bounced back from a ‘difficut week’ which could have been his last managing the ‘Red Devils’.

Cristiano Ronaldo was the inspiration behind an excellent United display, which provided the perfect response to last week’s loss that raised questions over Solskjaer’s future. 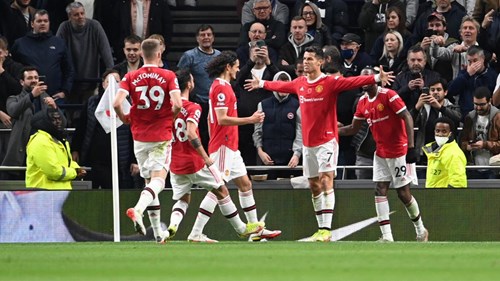 Solskjaer is not off the presure yet, but Ronaldo made life much more comfortable for his boss with a sublime far-post volley from Bruno Fernandes’ cross six minutes before the break, followed by a pass to set up Edinson Cavani for a second goals after 64 minutes.

“The most important thing for the fans and me and the players is that we connect together,” said the Norwegian boss, whose side recorded te first win in five Premier League games.

“It has been a difficult week for the players, the club, the fans, for me. I’ve stayed away from most of the noise. But you know what is happening out there and you know you have to put a performance up.”

“Every time you lose a game it is the worst feeling in the world as a coach or manager. We needed the whole week to work on this performance.”

Marcus Rashford wrapped things up with a finish four minutes from time as Spurs fans erupted in fury against manager Nuno Espirito Santo and their chairman Daniel Levy, with chants of “we want Levy out” echoing around the vast stadium.

Tottenham weren’t on the same level a United with Harry Kane barely in the game and unrest among their fans, who turned on manager Nuno when he replaced Lucas Moura with Steven Bergwijn in the second half.