Real Madrid showed no rust from the international break and soundly defeated Granada 1-4 on Sunday evening at the Estadio Nuevo de Los Carmenes.

Marco Asensio, Nacho Fernandez, Vinicius Junior and Ferland Mendy all scored in what was a pretty straightforward victory for Los Blancos against the Andalusians, who had to play the final 25 minutes a man down due to a straight red card for Monchu.

The result also catapults Real Madrid back to the top of the LaLiga table, two points ahead of nearest pursuers Sevilla and Real Sociedad.

In his starting XI, Carlo Ancelotti opted for Nacho at center-back with David Alaba, while Asensio was selected in attack alongside Karim Benzema and Vinicius. Ancelotti's decision paid off almost immediately, as Asensio made it 0-1 early on when he collected a surgical pass from Toni Kroos and outraced Granada defender German Sanchez before firing into the goal.

Kroos was in the middle of things on the second Real Madrid goal minutes later by polishing off a one-two combination with Luka Modric with a pass that met Nacho at the front post and was redirected into the net by the defender for a 0-2 advantage.

But Granada would pull a goal back in the first half thanks to an error from Vinicius, whose careless giveaway led to a Granada break and a Luis Suarez shot that deflected off of Nacho and into the goal, making it a 1-2 scoreline at half-time. 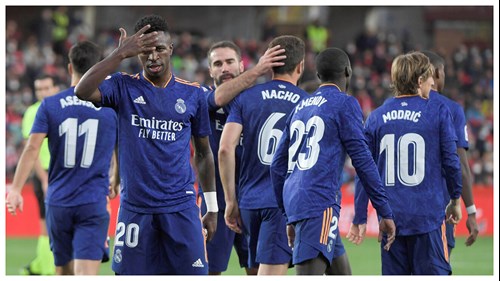 Real Madrid looked to regain control in the second half and a counter-attack restored their two-goal advantage when Benzema slid a pass into Modric, who played a first-time pass for Vinicius to tap into the back of the net for a 1-3 lead.

Any hopes of a potential Granada fightback all but ended midway through the second half when Monchu brought down Vinicius with a reckless challenge that drew a straight red card from referee Juan Martinez Munuera, leaving the home side with 10 men.

Not wanting to leave his starlet out any longer, Ancelotti made the call to change Vinicius with countryman Rodrygo Goes. With the man advantage, Real Madrid could open up the bottles and play their champagne football and soon enough it was 1-4 when Casemiro found Mendy, who completed his well-time run with a strong finish.

Ancelotti then introduced Isco, Luka Jovic and Eduardo Camavinga into the fray, with Modric, Benzema and Kroos getting a well-deserved rest on the bench, followed shortly thereafter by former Granada man Jesus Vallejo for Alaba, as Real Madrid easily saw out the remaining minutes to pocket the three points.